In this era, where PlayStation, Nintendo, and PC games have taken over the gaming industry by providing high tech, high definition and 3D mechanisms. Tabletop games are still the uppermost enjoyed gaming source amidst gathering of friends and families.

Whilst, the cut-throat competition in the gaming industry, Dungeons and Dragons (D&D) still serves to be one of the highest-ranked tabletop games played today. D&D is a role-playing occult tabletop game that was first issued by Wizards of the Coast and since 1997; it is a subsidiary of Hasbro.

The American game designers Gary Gygax and Dave Arneson are the creators of this best-selling game. D&D has several editions since its release and the latest 5th edition (5e) of the game was released in 2014. 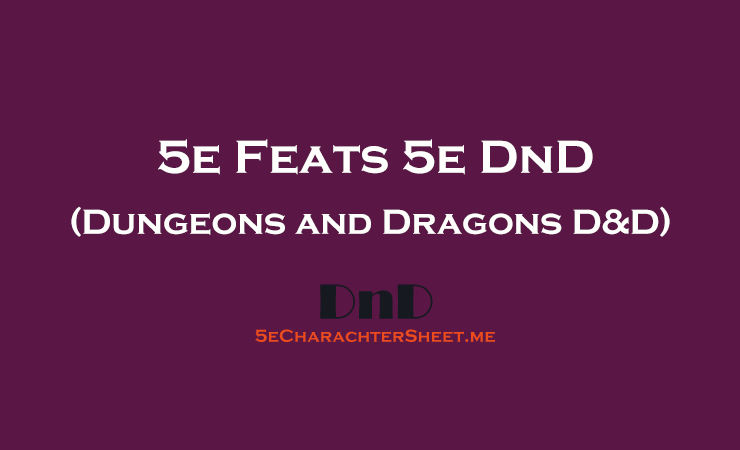 Let me give you a brief understanding of the aspect of Feats in the gameplay. So what exactly is the role of a ‘Feat’?

A Feat portrays an ability or talent that facilitates a respective character with new competences. In other words, a Feat gives a character the new upgrades, power, and talent to make your character stronger and sustainable in the gameplay.

Therefore, whilst using a Feat your character’s power and experience will increase as it levels. Your character will learn new techniques and tactics to make advancements in the game. Further, it does more damage to the opponents without the use of any side element.

In the game, you are only allowed to get the Feats when you reach level 4. Most classes can use Feats from levels 4, 8, 12, 16 or perhaps 19 depending on the ability score increase. In addition, Feats can be found in ‘The Players Handbook’ and ‘Xanathars Guide to Everything’.

Before choosing a Feat, you need to have the obligatory requirements that the Feat desires. If you do not attain the requirement of any respective Feat you want to use, you will be unable to use that particular Feat in the gameplay.

Whilst choosing a Feat, you have to ensure that your Dungeon Master gives you permission, as it is an optional feature in the D&D 5e. Also, you will have to keep in mind that you are allowed to choose a Feat only once at a particular time in the gameplay.

Moreover, your class tends to guide you when you reach certain levels. D&D has a feature of the “Ability Score Improvement” where it allows your class to support you with using the optional Feat rule. This allows you to use your preferred Feat instead of the ability score improvement.

However, in the D&D 5e, Feats are not a crucial feature as it used to be in the previous editions. It is an optional feature that can be used to upgrade your character at a major or minor level. Therefore, in the gameplay, you have to choose amidst using an ability score improvement or a Feat.

Feats are categorized into several types, these are:

These Feats can be used during the combat mode in the game. They guide you while fighting foes and provide you with advantages to further ease your battle against the enemies and rivals.

Moreover, certain rules of the weapons are overlooked whilst using these attack Feats. A few examples of combat Feats include Crossbow Expert and Great Weapon Master.

These Feats can be used during a battle for you to go into defensive mode. Thereby, you can guard and defend yourself whilst using any defensive Feats against your enemies. This will guide you to take less damage.

A few examples of dense Feats include Heavily Armed and Lightly Armed.

These Feats allow a character to cast spells on a battlefield. Although, you will need the ability to cast spells before using these feats. Any magic or enchantment related element can be used in these Feats.

A few examples of enchantment Feats are War Caster and Magic Initiate.

These Feats allow you to heal your character on a battlefield. In times of low health, you can instantly use these Feats to regain your health back or recover any damage done, whilst continuing to fight your foes without the worry of losing.

A few examples of health Feats include Healer and Resilient.

Whilst, these Feats cannot be used in attack mode, they are useful external to combats. They upgrade your character’s capabilities on the outside for you to make good strategies in the gameplay.

A few examples of role-playing Feats include Actor and Inspiring Leader.

These Feats are all of the Feats mentioned above. Putting it in easy terms, enchantment Feats and Role-play Feats fall in the Racial Feats group.

Although, your character will need to have a certain level of racial prerequisite to use or perhaps choose the Racial Feat. An example of Racial Feat is Bountiful Luck.

These are the top best D&D 5e Feats, which can be helpful for your game strategy and serve you as a triumph against your opponents.

With this Feat, you will have 3 luck points and luck will be on your side in the gameplay. Therefore, this enables you to roll your d20 again or manipulate the role a combat roll against you.

This Feat will allow you to make an additional attack on your enemy if the foe is closer to you. You can attack with a Polearm weapon using this Feat.

Firstly, for this Feat, you will require a prerequisite of Halfling. This Feat will give you the power to allow a friend within the range of 30ft from you to roll a 1 on a d20.

With this Feat, you can gain +1 on your one ability. In addition, choosing this feat will allow you to achieve expertise in saving throws.

This Feat enables you to learn 2 cantrips. In addition, you are allowed to learn from one class a single 1st– level spell.

I hope this blog has helped you to understand the feature of Feats in D&D 5e. Use these guidelines and set a perfect game strategy to give a hard time to your opponent and make the game even more fun.