Rogue is one of the standard character class that you get to choose in Dungeons and Dragons (D&D). Before starting your game, you can select from several character classes like the Paladins, Cleric, Warlock, Rogues, etc. as your preferred player.

Rogue is an immensely intriguing character that is also known as the thief in D&D. She gained this title because of her sneaky attacks and agile actions.

There are two types of capabilities in a Rogue:

Their fighting style is rather cunning and strategical than physically attacking the opponent. They wait for the opportunity to catch their foe off-guard and instantly sneak an attack. 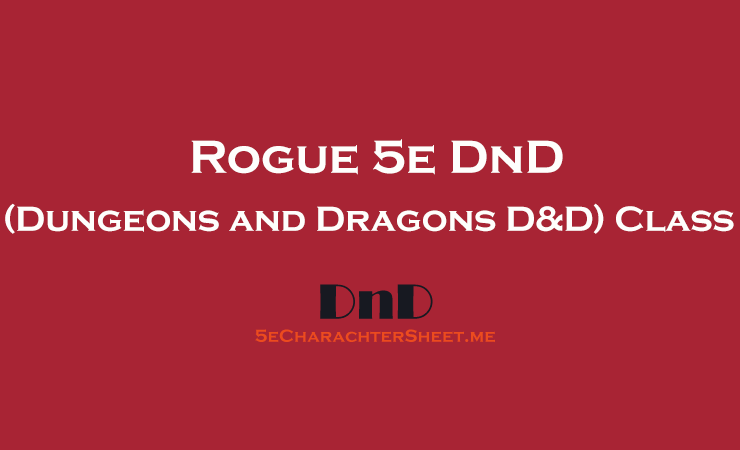 A Roguecharacter carries the following features in the gameplay:

Your Rogue character already consists or perhaps is facilitated with the following capabilities from your Background and Race in the game, these are:

You begin your game with the following equipment as a Rogue, moreover your Background in the game facilitates you with extra equipment and these are:

The following table will guide you through all the class features, levels and capabilities that you need to know about a Rogue character:

Here is a brief understanding to guide you through the Class features used by the Rogues in D&D:

Moreover, when you reach level 6, you get an advantage of choosing extra two more of the proficiencies.

Initially on the 1st Level, you already have the knowledge and ability to strike and distract your opponent. Later, in every turn you get, you do additional damage of 1d6 to your enemy as you hit with the Attack. That is only possible if on the Attack roll you get an advantage.

Keep in mind that the Attack you use should be a Ranged weapon or a Finesse. Furthermore, the damage done by your character increases as your levels increase in this class.

However, when your opponent is in the range of 5ft from you, it no not necessary to have an advantage on the Attack roll.

An ability that you get to learn during your training period. Thieves Can’t is a skill that is exclusively used by the Rogue character. It is a skill where the Rogues gets to learn a Secret mix of codes, dialects and Jargon. This facilitates them to converse in a secret language whilst hiding their crucial messages.

This serves as an advantage, as the opponent cannot understand their language or dialect to get the message they are conveying to each other.

Moreover, not only the dialect but also your Rogue character learns secretive symbols and signs to convey messages.

As you reach level 2, you get the ability of faster thinking and nimbleness. This facilitates your character to act and respond rapidly.

In this feature, on every turn you get on your combat, you get a Bonus Action. Although you need to keep in mind that you can only use this action when taking the Disengage, Dash or Hide action.

When you reach the 3rd level, you get the ability to choose a preferred archetype. You initially get this feature at level 3rd then later at level 9th, 13th and 17th.

Although, keep in mind that you can only enhance your Ability Score till 20.

At the 5th level, you can decrease the attack by half from your opponent by using your Reaction.

As you reach the 11th level, until now you have trained and gained enough experience on your skills and talents. Thereby, you can now add a proficiency bonus on your ability check, by playing 9 or less than as a 10 on a d20.

When you reach level 14th, as you get the ability to hear, you are at advantage. This ability allows you to hear any concealed enemy or object within 10ft of range.

At the 15th level, you get to enhance your mental strength. Therefore, you get the ability of Wisdom Saving Throws.

At the 18th level, you are now immensely strong and powerful to take any damage from the opponents. Therefore, the enemy does not have any effect on you and you easily win the fight.

On the 20th level of the game, you get a peculiar skill to gain an upper hand in a situation or perhaps fight if need be. Therefore, if you tend to miss out any attack on your targeted enemy, you have the skill to change that miss into a hit on your specific enemy and vice versa. Here, you are allowed to treat a d20 as a 20.

However, you use the Stroke of Luck feature again; you will have to finish a short or Long Rest.

As mentioned above, as a Rogue character you get the ability to choose your preferred Archetypes. A Rogue consists of several features that include their talents, attacks and quick responses. The choice you make is what describes your main goal and focus as an Archetype. These are as follows:

As a Rogue, you already have the skills of a thief. In fact, as you advance in the game you automatically keep enhancing your skills in thievery. In the game, you are an explorer, Treasure hunter, investigator and excavator. Moreover, you gain knowledge and enhance your skills in learning new dialects and languages, excavating the ancient relics and remains, and lastly using enchanted items.

On the 3rd level, you get the ability to check your Dexterity by using the Bonus action along with the Cunning Action. Moreover, you can use the Thieves Tools to open up a lock or deactivate a trap.

On the 3rd level, you get the ability to quickly climb regions and heights, it eludes the extra cost on Movement. Moreover, you increase the distance cover whilst making a running leap that is equal to the Dexterity modifier in feet.

When you reach the 9th level, you get the ability to check your Dexterity on your movement.

At the 13th level, you have enough knowledge to work with enchantment items. Therefore, you can now ignore all the requirements that needs to open any Magic items.

As you reach the 17th level, you are already an expert in evading danger. In the game, you are able to take two turns in the first round of the Attack. You can now take a normal Initiative in your first turn and later, you can you can take your Initiative minus 10 in your second turn.

I hope this blog has given you all the necessary and brief information of the Rogue Character of D&D. You can use and pre-prepare game strategies to easily win battle in your D&D gameplay.