Dungeons and Dragons are one of the best games the world has seen in the past few years. It’s an RPG game which means the participants will play different characters and move the game forward with the help of their own story and strategies. With a free mind, the players can easily imagine and mold the story in the way they like. So, to stop this kiosk, we have a Dungeon Master who takes care of all the characters by sharing the character sheet and describing their powers.

In Dungeons and Dragons, you can choose a character and with its strengths, weakness, and their backstory. In 2014, the fifth edition of DnD was released with an updated player’s handbook. These characters were divided into different classes where the characters acquire new skills and powers when reached on higher levels. The 5th player’s handbook includes classes like Barberian, Bard, Cleric, Druid, Rogun, Sorcerer, Warlock, Wizard, Paladin, Monk Fighter, Rogue and Ranger.

Although every player tells the different background story of their character to the dungeon master, some are prevalent. The “Hermit background” is one of the most popular backstories used by Dungeon Masters or the characters to kickstart the game. So, let’s discuss what this Hermit background is. 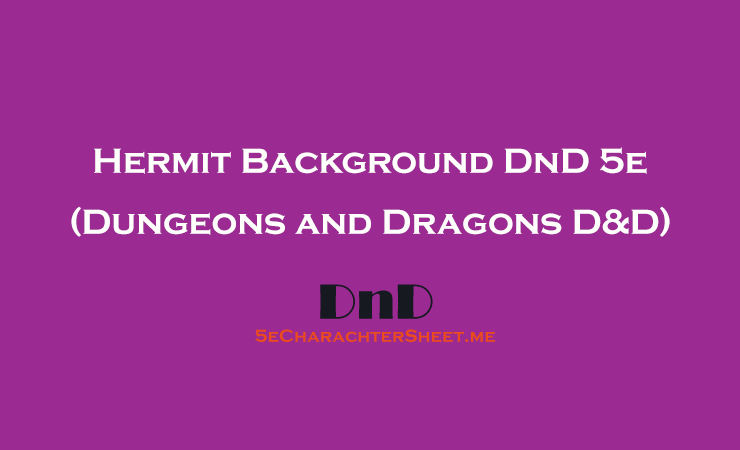 What is the Hermit Background?

The Hermit 5e background in Dungeons and Dragons(DnD) is used by most of the players as it suggests a variety of characteristics like “Life in Seclusion”. We have many DnD 5e backgrounds like the soldier’s 5e background and several others, but the Hermit seems to fit in almost every situation. The players got some cool equipment like the 5gp, a set of common clothes, a winter blanket, a herbalism kit, and a stuffed case that contains your stories and prayers.

Features like “Life in a Seclusion”, make this background a better choice, but some features like “know a secret or discovery” helps a player to dominate on others. In Hermit background, you lived in seclusion, you are alone for most of your life. You are proficient in some skills like medicines and religion, you can also speak different languages.

Now as we got to know what the Hermit 5e background is, let’s talk about life in seclusion:

Life in a Seclusion:

Life in seclusion means that you have lived away from the world. You wither lived alone(in forests) or in a sheltered community(like the monasteries) for the formative part of your life. To focus one a goal, you’ve separated yourself from other people. Maybe, you want some answers or the true meaning of life.

A stuff case full of notes from your players and studies, A white jacket, and a set of common clothes.

A Life in seclusion is a great feature and you can easily explain your background to the DM(Dungeon Master) using it. You can work with him or roll the dice on the tables to determine the reason behind your seclusion. For example, You chose Dragonborn as your character. The Hermit background for it can be: You were a farmer and has an interest in reading books. When you’re on the farms, your family died in an accident. You took your grandfather’s twin blade and left to find peace in life.

Some other reasons you lived in seclusion could be

The quiet seclusion of your extended hermitage gave you access to a singular and powerful discovery. The exact nature of this revelation depends on the character of your seclusion. It might be an excellent truth about the cosmos, the deities, the powerful beings of the outer planets, or the forces of nature. It might be a site that nobody else has ever seen.

You might have uncovered an incontrovertible fact that has long been forgotten or unearthed some relic of the past that would rewrite history. It might be information that might be damaging to the people that or consigned you to exile, and hence the rationale for your return to society.

With Hermit e background and life in seclusion, you can add a few more personality traits which include:

This Hermit 5e background serves meditative source if seclusion through which you prayed and also studied. But more backgrounds can use and describe your background story to the DM(Dungeon Master) and other dragons. If you want to go religious, the acolyte is good for you. Or you could use the outlander background if you want to play rugged wilderness recluse. You can even become a Charlatan, a wise person, and let the pious fools support you.