Role-Playing Games have become one of the most popular sources of entertainment in recent years. Some games like Cyberpunk, Dark souls and the Witcher are PC games, while games like 3 Bulldogs and DnD are the fantasy tabletop games which you can play with your friends and family at parties and other occasions. The best part of these games is a huge catalog of characters and their classes.

Dungeons and Dragons have some of the unique characters and backgrounds that give you a whole new experience. Characters like the Warforged, Tabaxi, and the new Kenku of 5th edition are more popular than others. They also have a better origin story through which you can easily convince your DM(Dungeon Master) and other players to believe in your character.

There are hundreds of fantasy characters on the internet that you can use. Among them, Kenku is one of the most famous characters that DnD 5e players tell about to the Dungeon Master. So, today we’ll discuss more Kenku, its powers, statistics, and the latest version so that you can use this character to the fullest. 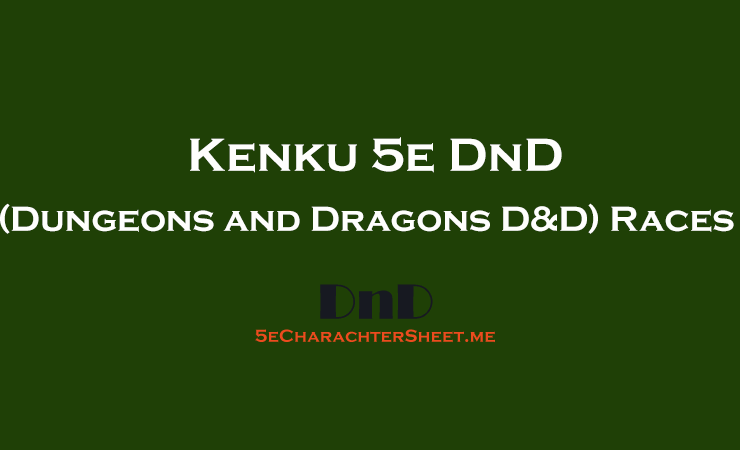 Kenku, the flightless birdman is the avian humanoids that resemble the Being selfish and secretive, the Kenku were often engaged in the plots where the player needs to acquire more power and wealth. Kenku operates in small gangs and often live in large human cities. In southern Faerun, a major continent of planet Toril where they usually work as a spy, assassin, or a thief.

Some people also call Kenku a Humanoid creature. As soon as they hear any sound, they come into action as Kenku is a very attentive creature. This quality of high attentiveness makes them a perfect choice to deal with burglars, robbers, or other people. Although Kenku had evolved from the avians, they don’t have any wings to help them fly. The reason behind no wings is the greed that their former master found.

Kenku has arms in place of wings and bird-like talons for feet. However, they retained some bird-like features including a long darkened beak and black & beady eyes. Their head and torso were covered with dark russet-brown colored feathers, but the limbs are scrawny, bare, and scaled like those of birds’. In other words, they’re closely related to modern-day ravens.

As the Kenku is a flightless bird, they possess hollow bones that make it lighter than most creatures of their height. They are a bit shorter than an average human being, about 5 feet or 1.5 meters tall. They also weigh around 75 pounds or 34 kilograms, lesser than other creatures of the same height. These features may pose this character as a weaker one, but they give it more agility and dexterity. Kenku typically wears the nondescript brown robes under which they hide various tools and weapons.

Kenku has a habit of being secretive and is also a cunning creature.

The majority of Kenku were evil, but some of them adopted a neutral and unaligned view to becoming good citizens. However, they’re opportunistic and unscrupulous which means that they could do some illegal or immoral acts. Surprisingly, Kenku performed better and morally with allies. So, if you want to use this character at it’s fullest, then you can discuss with your DM(Dungeon Master) and make an ally with your fellow players.

This creature is very smart and knows how to bluff people. It enables them to do difficult tasks and also makes them powerful enough to do the activities they want to do. Kenku was considered as dexterous as they’ve very different traits than other characters like the Warforged and Tabaxi.

Some of them are listed below:

Speed: The birdman can move with a walking speed of 30 feet per second.

Age: Just like humans, Kenku enjoys adulthood after they have entered in the teenage phase.

Skills: Their lying skills are one of the most important ones that make them different from others.

Alignment: Kenku only focuses on their survival and thus tries to remain neutral. For them, the main thing is their existence and they always try to save their clan either by Hook or by Crook. They have a very chaotic alignment, most of them are either criminals or sometimes thieves.

Size: Generally, Kenku is medium in size as humans and didn’t grow much.

Ambudher: In case of Kenku, the best benefit you would get if that of attack rolls.

Mimicry:  Mimicking this character is not a tough game, you can easily mimic them including their handwriting. By hearing a Kenku can tell everything about a person through the wisdom check. You can confirm the success rate using their intelligence trait. Therefore, the prediction is a simple and easy task for a Kenku.

Greedy: With Kenku on your side, you’ll gain proficiency in the Deception skill.

Languages: You can read, and write the Auran and common language. However, you can only speak through your voice mimicry trait.

A kinky could fight better with allies instead with others of its kind. They are dangerous if aided or when flanking an enemy with an ally. Kenku might be vicious during a fight but were cowardly naturally. They would usually flee the moment a battle turned in their opponent’s favor, and even surrender if it meant staying alive.

Kenku generally uses short swords, saps, or short bows in combat. They also use other wielded clubs, daggers, slings, and even spiked chains. But even when disarmed, they would also slash opponents with their claws. Kenku typically wore leather armor, though a warrior might choose a sequence shirt or buckler.

Kenku used to work for the master who lost his memory, long before the Kenku existed in this form. They were given the large wings by the king of Kenku in order to fly high and complete the tasks they were assigned for. But after some time, a Kenku managed to steal the king’s speech and the language, resulting in the formation of a new species(which we see at present).

When the king got to know about this treason, he put them in prison and ordered to cut oof their wings, so that the Kenku’s would always beg and stay under him. Because of this reason, the Kenku lifespan is quite short as compared to other characters and each male has two wives so that their expansion could be faster. This is how the Birdman came into Form.

Kenku is somewhat analogous to the crows having a height between 5’0 to 5’6 and weight ranging in 40 to 50 kilograms or 90 to 110 pounds. They have large beaks, black feathers, and clawed hands. When it comes to fitness, Kenku is weaker but more agile than humans. Their skin color varies from species to species, some are yellow while some are greyish. They can also fly but up to a limited distance and height.

They have a characteristic that every Kenku goes through, they fly as soon as they were born and some of them even unf=dergo training and learn how they can fly high. The Kenku don’t have wings, but still, they like to reach on tall structures. In addition, they lack motivation and innovation. So, they’re unable to create heavy-duty machines or advance weapons to defend and grow their society. As Kenku’s are small, they can easily hide anywhere in small areas and disguise their enemy.

Kenku is the most famous character among the player of Role-Playing Games like the Dungeons and Dragons. A lot of people search for it on the internet and more players are suggesting good backgrounds and skills to use with it. You can choose Kenku if you need to make allies and remain neutral throughout the game. You can also seek the help of your DM(Dungeon Master) and align Kenku with other players.