Dungeons and Dragons are one of the best RPG(Role-playing games) games we have ever seen. With the release of the new editions, it’s introducing more and more characters and backgrounds. The characters were divided into several categories based on their skills, weapons, and other properties. DnD also enables you to modify some skills and add twists to the background.

One of the most important things in Dungeons and Dragons 5e is to select a good character. There are many character classes like the Barbarian, Warlock, Wizard, Bard, Druid, Monk, Fighter, Paladin, Rogue, Ranger, Sorcerer, and Druid with different bases. Different characters come under different classes based on their background, traits, and skills. One of the most used characters in DnD 5th edition is “The Tabaxi”. 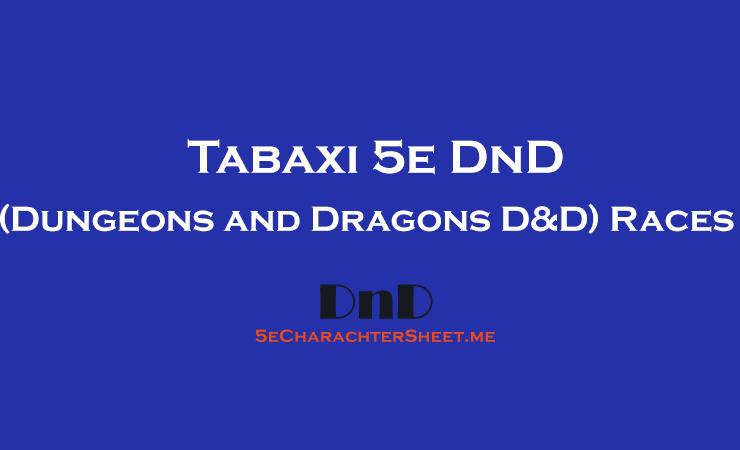 The Tabaxi – Lions, Tigers, and Catfolks

Hailing from the strange distant land, the wandering Tabaxi of the Dungeons and Dragons is the catlike humanoids. Driven by the curiosity to collect the interesting stories, tales, and the interesting artifacts, the Tabaxi constantly roam around the world and lay their eyes on all the wonders of the world. Tabaxi never stays in one place for a long time. Uncovered secrets from their inmate nature, Tabaxi let things to leave without losing their treasure or legends.

Tabaxi range from lion-Esque noble felines to mangy stray pickpockets and everything in between. Tabaxi can bring some wonderfully flavorful and fun characters, so let’s take these cats out of the bag and undergo everything you would like to understand.

The Tabaxi always comes from somewhere whenever your adventures take place. Visiting here and now out of curiosity, Tabaxi is meant to be the wanderers roaming in a wanderlust. In their distant homeland, the life of Tabaxi is simple and tribalistic where they are content with the cat lord, and patron deity. Their God named “The Cat Lord” belled them with the curious nature to explore the world. Tabaxies are essentially driven by curiosity, they go wherever it takes them.

Although Tabaxi appreciates trinkets and gold, they are really after the stories. That’s why the story of the daring dungeon delving is more important than actual treasure at the end of dungeons. Now, this is where the chaotic nature of Tabaxi comes in, they can be ready for anything if they think it will make any exciting adventure.

Tabaxi comes in different forms, there are several character options with easy introduction and campaign settings. They have temporary but strong obsession which could easily line up with the next leg of the adventure. If you’re stuck in a situation where you fight with the demon lords, then Tabaxi’s character is ready to save you. If your adventure is about recovering a long-lost curiosity, then try Tabaxi’s greatest obsession.

With the help of traits listed above, you can easily beat others in the 5th edition of the Dungeons and Dragons.

Taxes were generically described as similar to the cat folks. But everything related to a wide definition of ‘cats’, you can easily modify your character depending on your needs. Many animals like the panthers, Lions, tigers, cheetahs, leopards, housecats, bobcats, pumas, and jaguar-esque are related to your character which you can use in any way.

With 90% of finished ideas, the 5th edition templates left all the customization options for your fun. You can change the color of your fur, the length of your whiskers, do you want to be well-groomed or not, length of your tail, eyes color, and size, fluffy or poofed up, and other traits beyond the cats.

There are many characters outside DnD(dungeons and dragons) with similar traits which you can take help from. Some of them are listed below:

Neko or Catgirls from different Animes

Neko folks can be defined by catlike ears and tails, whiskers, paws, and very light feline features as compared to the Tabaxi. If you want to introduce your Tabaxi character from Neko’s direction, then you need to talk to your DM(Dungeon Master). The reason behind this is that the Nekos are different from the Tabaxi at an aesthetic level.

When it comes to building a Tabaxi character, the Thundercats aren’t far away from the mask, particularly if you look at 2011 rather than the original. The only thing that’s missing is the face, while Tabaxies are feline but Thundercats are practically human. If you want to challenge the Mumm-Ra of 5e campaign, then the Tabaxi race can easily defeat them.

Khajiit is a pretty good concept for Tabaxi characters as the Khajiithas wares if you have coins. Instead of curiosity and wanderlust, The Khajiit is similar to the Tabaxi with only a little bit of difference in thievery. Also, they have fur patterns similar to that of Lynx or a Bobcat. So, Tabaxi is a great opportunity to play Khajiit if you always wanted to play it.

Chosen by their clan, Tabaxi has a single gender-neutral name based on several factors like the astrology and prophecy. They typically use a short descriptive sentence and utilize a shorter nickname derived from it. So, think about both of these conditions before naming your new Tabaxi character. Also, remember that your player will only know your character by the nickname.

They also have their clan name that basically represents the geographical features of their home territory. Some of the Tabaxi nicknames are listed below:

So, I hope you got to know about the Dungeons and Dragon 5the edition character “The Tabaxi”. It is one of the best characters in DnD as it has so many traits and pop culture characters that you can use to enhance the look of your catfolk. You can also align it with a good background like the Folk Hero background or the Gladiator’s Background give it more powers.