The world is full of brave heroes with great abilities and powers in Dungeons and Dragons. These larger than life heroes fight battles with epic villains and protect the innocents from their clutches. In Dungeons and Dragons, your character can acquire more powers as it reaches higher levels and defeats more villains. However, you have to choose a good background for your character so that you can portray him as a humble person in front of the DM and other players.

In Dungeons and Dragons, every player has to select a character and explain its origin or Background story to the Dungeon master. It helps the DM to set a base for the story. Also, the other members get to know about your characters like their abilities, powers, and other aspects. Now, there are many background stories like the Outlander, Charlatan, Folk Hero, and the Hermit Background. But today, we will discuss the Folk Hero 5e Background for players of the Dungeons and Dragons.

Folk Heroes in DnD 5e earned respect, admiration, and peasantry by their selfless acts. People treat them like a hero as because they stand for them no matter what the consequences they’ll face for the rest of their lives. You are a good survivor, animal handler, and carry a set of artesian tools along with a pouch containing 10 GP. 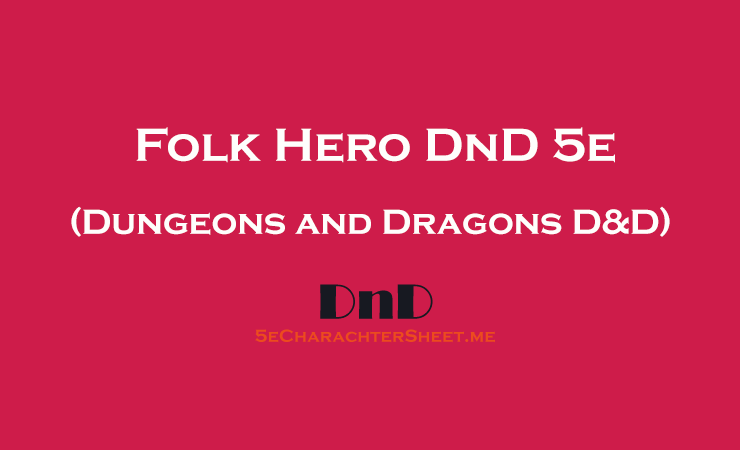 What is Folk Hero 5e Background?

Folk Hero in 5e DnD comes from a humble rank but you are supposed to achieve much more. People from your home village, consider as their champion, and you always protect them from the problems. However, your destiny is calling you to stand for the common folks threatened by the tyrants and monsters everywhere. People remember you for the help and sacrifices you gave to protect and help the common folks everywhere.

Same as the player’s language

A set of artesian Tools(any if your choice), a shovel, a set of common clothes, a belt pouch containing 10gp, and an iron pot.

Previously you pursued a simple profession perhaps as a farmer, minor, seventh, shepherd, woodcutter, gravedigger, among the peasantry. However, something happened and it marked you for the greater things. You can wither randomly determine a defining event that can mark you as the hero of people, or you can select any background from below.

Since you came from the world of common folks, you lifted among them easily. You found a place to hide, recuperate, or rest among the commoners, but your powers and habit to save your people raised you as a danger for them. They would shield you from the clutches of the law or the enemies searching for you. but they’ll not risk their lives for you. You can plot your story as:

Far from civilizations, the barbarians came from a humble origin. Here, the first is to understand is whether your heroic act happened before or after you left the tribe. After that, you need to choose a defining event. Your heroic deeds performed are less important than how it was perceived.

A goliath Barbarian standing against the monsters might do that to simply add to his glory, without thinking much about the peasants nearby. Mostly, the barbarians like to embrace their glory as their culture is filled with the stories of brave folk heroes who rose from the common origins and fought against the impossible odds.

As a player, your choice for your fame is up to you, but don’t forget the little people who helped you to get where you are now.

Sometimes Bards with the folk hero background look like manufactured or fake. Feel free to elaborate your humble beginning and rise od fame as the Bards control the news of typical medieval settings. Mainly bards weaponize opinions, and a folk hero would be a perfect cover for more untruthful plans, you should have them. Bards Folk Hero background will benefit you to largely inform the DM(Dungeon Master) about your character and its adventuring career.

There was a movie of names “Drunken Master 3” of a Chinese actor Jackie Chan. You can draw inspiration from this movie and play as a monk who protects the interests of the town and fights against a corrupt company. You can take the example of any Kung fu or samurai movie like the “the last samurai”, they always choose the right path and defend the peasants.

Before choosing the Monk Folk Hero background, you need to explain why your monk chose to fight at first, what you were doing when in the town when you passed through it? or did the peasants rejected you in the first place? If you have chosen a moral path, then why you fought for a king? Where you live and why you left the monastery? To help you out, here are some personality traits which you can use for the monk folk hero background.

There is at least one Folk Hero background for every DnD character like the Paladin Folk Hero, Banger Folk Hero, Rogue Folk Hero, Sorcerer Folk Hero, Warlock Folk Hero, and the Wizard Folk Hero. However, you can mold the background depending on the situation and the powers you need to win the game. So, a folk hero is a common person, who can be better or worse. Folk heroes have a humble origin as a virtue, and their communities are very important to them.