Since the 5the edition of Dungeons and Dragons was released, the players had regularly demanded the Warforged as a popular racial option. Warforged is one of many races from the Dungeons and Dragons world of Eberron: Rising from the Last War. These races include Kalastar, Changelings, Shifters, and infamous Warforged. Warforged was a novel and exciting idea of creating magical robots created ages ago. Originally, they were golems with the ability to learn and get aware of the battlefield.

Imagine you could build a robot that shortly becomes aware of the battlefield and react accordingly, who can fight against your enemies and save the lives of your army. Well, we’re getting closer to this technology in the real world, but until then we can at least have it in our RPG games. However, if that awareness of the convert them into a soul who’s not interested in war anymore? Well, if this happens, then the robots ill refuse to fight and go away to live a happy life. Dungeons and Dragons 5th edition featured a new race of the World of Eberron “The Warforged”. 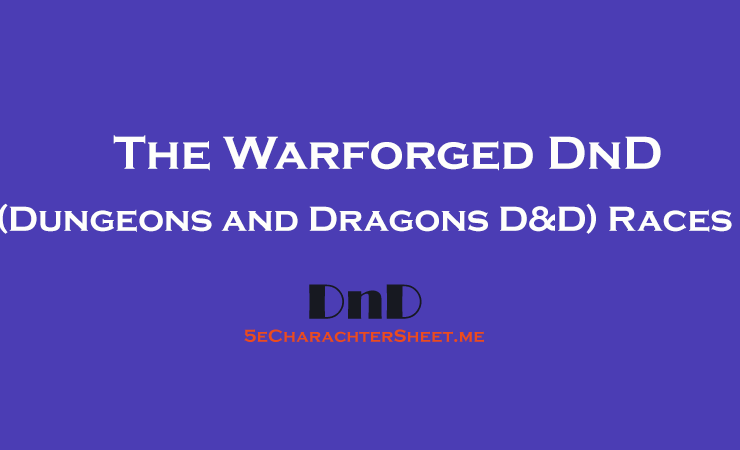 Meant to fight the last war, the first Warforged were built as the mindless automatons to fight against the enemies of House Cannith on the battlefield and save thousands of lives. But they kept on improving these steel soldiers and devoting vast resources, as a result, their consciousness changed into souls, and the soul conflicts with the desire to live. They were made of wood and metals, but still, they can feel pain and emotions.

When Warforged found that dying in a pointless conflict is stupid, they stood against their masters and fled the battlefield. So, these steel soldiers are now living a peaceful life away from the conflict of death. However, their body remains the same, the steel soldiers well known for their war powers, size, and single mind focus. You can make Warforged either a fearsome enemy or a powerful ally.

Warforged created to fight the Last war and fulfill the purpose of their masters with superiority. They experience fear, hatred, anger, pain, and happiness the same as we humans do. As they naturally seem to be reserved and pensive, Warforged hides their feeling behind their dull faces. They always appear distant in conversation as they were not designed to show any facial expression. But that doesn’t mean they are complete without expressions.

When Warforged experience specific or strong emotions, their eye become brighter than usual. Moreover, they’re continuously modifying their faces so that they can be more expressive and their companions feel comfortable talking with them. As the Warforged spent most of their time working for one specific goal, they don’t have much experience in the real world. However, they make their goals and can work extremely hard as military thinking is the foundation of their personalities.

They simultaneously struggle to seek out ways to relate to the races that created them because the Warforged tries to seek out an area in society for themselves after the last war. In Karrnath and Thrane, Warforged were seen because of the property of military forces. Most of the Warforged in those nations function slave labor.

They wont to repair those roads and buildings which were damaged within the war. they need freedom throughout the remainder of Khorvaire but sometimes they find themselves the victims of discrimination. Warforged isn’t an emotional creature who accept their servitude and struggles with equanimity.

With the Warforged character, you’ll have the following traits:

Integrated Protection: Built with defensive layers, the armor can enhance your body and make you safer.

Constructed Resilience: You were forged to have some remarkable strengths. These are:

Specialized Design: With Warforged, you can have one skill, and one tool proficiency of your choice.

Languages: You can speak, read, and write your native, plus one more language of your choice.

Integrated Tool: You can choose one the tool of your choice and it will be integrated into your body. With any ability check you make, you double your proficiency bonus. The advantage of using an integrated weapon is that you can use it with usual focus.

Assault-Model Warfoged: Built with the strongest frame and hardest muscle fibers, this Warforged is the frontline troops in the war. They can wield powerful weapons that can easily devastate the enemy. With Assault-Model Warforged, the strength score of your character increases by one.

Heavy Integrated Weapons: The integrated weapons trait isn’t limited to light weapons. Now, you can use any weapon in which you have proficiency. you can gain your proficiency using weapons like shields, heavy armors, crossbows, swords, hammer, and melee weapons.

Command mode Warforged: As the name suggests, these Warfoged were designed to control other units. Programmed with higher levels of intelligence and tactical thinking, they can handle the complexities of war by quickly reacting and changing the battlefield conditions faster than any other model. With Command mode Warforged, your ability score in intelligence increases by one.

Infiltration-Model Warforged: This type of Warforged are best suited for sying on your enemy for detecting any kind of sabotage mission operating behind the enemy lines. They have lighter chassis than Assault Warforged which allows them to move faster. Also, they have better optics like optical crystals and night vision with a range of 60 feet. The Infiltration model increases your dexterity by one.

The majority of Warforged are Juggernauts or Skirmishers – soldiers or scouts who operate under the banner of one of the five nations. But Warforged envoys were designed to perform other functions as they have skills and integrated tool proficiency. Some of the characters with an integrated tool are Lute, Compass Rose, and the Masque.

While making your envoy, consider the following aspects:

Warforged is one of the best races to put your character in. There are several different powers, skills, and weapons that you can integrate with your Warforged and make it more powerful. Their origin story is also very simple and you can easily mold that with your ideas. They don’t have permanent Homeland which means you can add some cliffs and bumps to your background and make it more appealing.