Cleric is one of the standard character class that you get to choose in Dungeons and Dragons (D&D). Before starting your game, you can select from several character classes like the Paladins, Cleric, Warlock, Rogues and Barbarians as your preferred player.

Clerics are sort of a mediator or perhaps negotiator between the gods and the human world. They have immense holy magic power and endeavor to carry out the divine work of the gods and the immortals.

Clerics get their Divine magic directly from the gods. The gods and deities allow this magic to flow in the world through the Clerics. 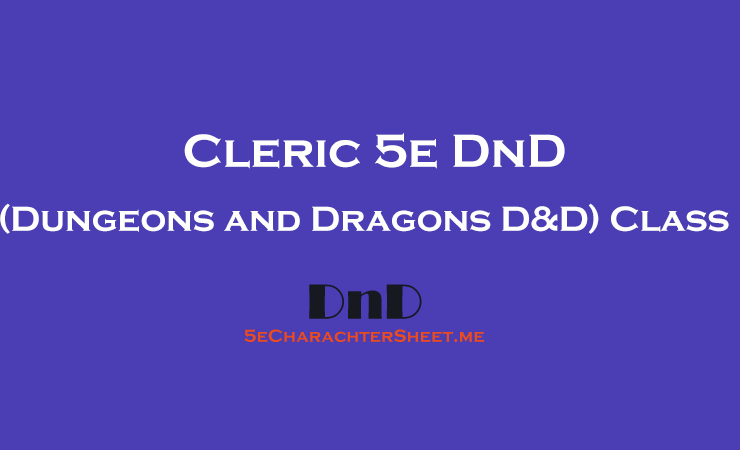 A Cleric character carries the following features in the gameplay:

Your Cleric character already consists or perhaps is facilitated with the following capabilities from your Background in the game, these are:

You begin your game with the following equipment as a Cleric, moreover, your Background in the game facilitates you with extra equipment and these are:

The following table will guide you through all the class features, levels and capabilities, cantrips and spell slots that you need to know about a Cleric character:

You get the ability to cast Cleric Spells as a feature of the Cleric character in the gameplay. These are:

The Table above portrays in detail the amount of Spell slots you need, to cast the spells of the 1st level or higher. Therefore, to be able to cast the spell you have to spend a slot of that particular spell’s level.

Furthermore, to be able to reuse your feature, you need to finish a Long Rest.

As you get to choose from the Cleric spell list, you can prepare of a set of Cleric Spells that you intend to cast in the gameplay. You have to choose a number of the Spell that should be equal to the Wisdom modifier + Cleric level.

In fact, you have the ability to change the list of Spells that you have prepared. For this, you need to finish a Long Rest. Although to prepare a new list, your character must spend at least 1 minute in prayer and meditation.

Your Spellcasting ability is Wisdom for your Cleric character. As mentioned above, the gods directly provide you with divine power and wisdom. You are able to use your Wisdom as a Cleric spell that refers to the Spellcasting Ability.

Moreover, whilst setting your saving throw DC you can use the Wisdom modifier to make an Attack roll.

As you prepare your spell, you have the ability to cast a cleric spell as a ritual.

You get the ability to use a Holy Symbol for a Spellcasting focus.

In the gameplay, you get to choose one domain that is correlated to your particular deity. For instance, the Life Domain. Therefore, the preferred choice of your Domain provides you with the Domain Spells and features.

This can be done on the 1st level of the gameplay. Moreover, you get extra ways to use the Channel Divinity was you reach the 2nd level, then again with extra benefits in the 6th, 8th, and 17th level.

The Domain spells you contain have lists of spells that you get on the Cleric levels. As you get a domain spell, it is by default already prepared for you.

Although, keep in mind that if you contain a domain spell that is not on the Cleric spell list, that spell is perhaps a Cleric spell.

As you reach the 2nd level, you can now channel divine power and energy from your particular deity. This energy can be used to fuel the magical Effect.

Initially, you get to start with two effects: The Undead and Effect that is granted by your domain. Some domains provide you with extra Effects when you reach higher levels.

You get the ability to choose the effect you wish to create, as you use your Channel Divinity. Although to be able to use it again, you need to finish a short or Long Rest. Moreover, keep in mind that a few Channel Divinity requires Saving Throws.

You get to present the Holy Symbol and utter a prayer censuring the Undead. This can be done as an active mode. You get the ability to make the Undead see and hear you in the range of 30ft. Therefore, you need to make a Wisdom Saving Throw.

Although, keep in mind that you can only enhance your Ability Score till 20.

When you reach the 5th level, you get the ability to destroy the opponent on a hand. This happens when a creature fails the saving throw against your turn. This can only take place if the Undead is of CR ½ or lower.

On the 10th level, you get the ability to take the help of your particular deity on behalf of you.

Although, as you get successful in getting assistance from your deity, you will be unable to use the features for 7 days or you will need to finish a Long Rest.

Furthermore, on the 20th level, by default, the deity will aid you. Therefore, you will not require rolling the dice for the deity’s assistance.

The positive energy you acquire is from the Life Domain feature. You get the healing power and energy from the gods of life. Thereby, they allow you to heal the injured and sick characters in the gameplay.

Any non-evil deity can claim the Life Domain these include the agricultural deity, gods of healing, sun gods, and gods of humans and community.

On the 1st level, as you choose the Life Domain you get the ability to use Heavy Armor.

On the 1st level, you get effective healing spells. As you tend to use a spell that is of 1st level or higher that Restores Hit Points to the opponent, therefore, the opponent will gain extra Hit Points that will be equal to 2 + the level of the spell.

When you reach the 2nd level, you get the ability to use the Channel Divinity. This feature helps you to heal the wounded and injured.

Therefore, you will have to present the holy symbol and summon the Healing energy as an action. This can then regain the number of Hit Points equal to five times the Cleric level.

You can choose any opponent that is in 30ft range of you.

As you reach the 6th level, the ability to cast Healing spells on others can also heal you. As you tend to Cast a Spell that is of level 1 and higher, it regains Hit Points to the opponent other than yourself, thereby you regain Hit Points equal to 2 + the level of the Spell.

On the 8th level, you can merge the weapon strike with divine energy. On your turn, as you hit an opponent with the weapon Attack, you can source the Attack to an additional 1d8 radiant damage. Furthermore, as you reach the 14th level, the additional damage done by you increases to 2d8.

When you reach the 17th level, to Restore Hit Points, you would casually roll one or more dice along with a spell. Although you get the ability to use the highest number for each die.

I hope this blog has given you all the necessary and brief information about the Cleric Character of D&D. You can use this blog and pre-prepare game strategies to easily win battle in your D&D gameplay.