The Aasimars in D&D 5e are similar to humans with integrity and values. They have a great amount of outsider blood in their ancestry. They are kind in nature, however, that’s not the case every time. Sure, they are more inclined towards kindness than creating mischief, they can also gravitate towards evil if exposed to other organizations associated with other methodologies. In Dungeons and Dragons 5th Edition, an Aasimar can also lie dormant for years and suddenly appear to human parents.

When Aasimars are born, it is concerned to be a good fate. Though they are a symbol of honesty, piety, and integrity, some of them even take undue advantage of their good reputation. There have been many of them who have brutally subverted expectations of others and have been terribly cruel to others. Aasimar often lives by the slogan ‘It’s always the one which you least suspect’ and thus they are the ones who are busy living double lives either as false heroes or woke citizens. 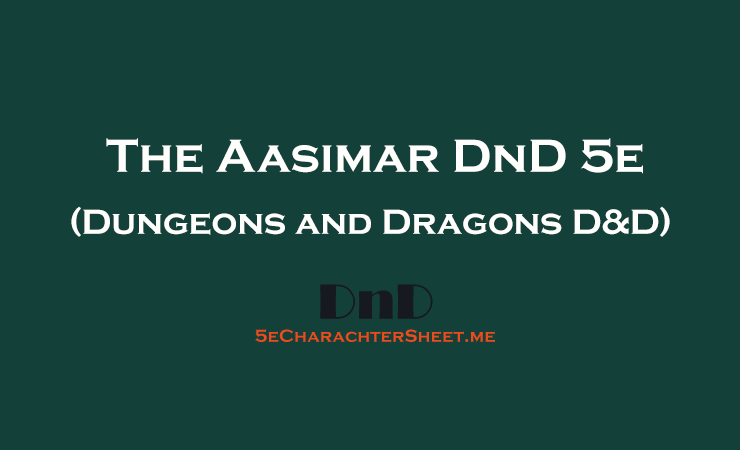 As a creature, Aasimar in D&D 5e is pretty close to humans because of their ancestry. They even look like normal humans. D&D 5e Aasimar looks beautiful and is lanky as compared to normal humans. They generally have pale eyes without pupils. These creatures have emerald skin as they have descended from Planetars. Their lineage has a combination of hair and feather drawing them much close to the humans.

There are not many features that can segregate the Aasimar from a normal human. Apart from the heritage factor, they have a similar physical description to humans including shiny hair, jewel-like eyes, and beautiful skin. As a D&D 5e Aasimar character, you’re a native outsider with maximum appeal descended from holy angels.

Unlike humans and other creatures who are divided based upon their role on this planet, no two Aasimar are the same. There are many lesser-known facts about Aasimar in D&D 5e. These include Celestial Champions, Hidden Wanderers, Protector Aasimar, Scourge Aasimar and Fallen Aasimar. Let us understand each of these types indetail.

These are the best types of Aasimar in D&D 5e. They are placed in this world to protect the law and order. They lead by example and stand up against evil every time it lurks around them. They battle for justice and move ahead with the help of visions and dreams which they get from a very young age. They can grant destiny and desire for the right creatures around them. Every Aasimar who falls under this category can be classified as an agent of God, sent on the planet to guide other creatures.

Aasimar’s are often undercover. They maintain a low profile and are enemies of the evil. Since they vouch of goodness, they have a lot of enemies and being a celestial champion automatically puts you at risk as evil fiends and cultists are always lurking to find a chance to kill you. That’s the reason why Aasimar has hoods and other gear to protect their identity. Their love secrecy and they don’t want to endanger the lives of the people.

The protector Aasimar are allowed to strike at evil whenever the need arises. They are sent on the planet to protect the weak and stand tall against the darkness. They receive advice and order from childhood and thus they are not afraid of standing up against the evil forces. When you’re bestowed with the Protector Aasimar title in D&D 5e, your wisdom score increases.

They are imbibed with divine energy and they are the only Aasimar who have power to even destroy an evil desire. They don’t flinch and are strong enough to handle any outcome. They walk by the rules are quite intense as compared to the other Aasimar. If you’re a Scourge Aasimar, your constitution will increase by 1.

Fallen Aasimar is those who are touched by dark powers when they’re young. Fallen ones do not work with the same integrity and are quite the opposite of the Aasimar you saw above. They are more powerful and their inner light is replaced by shadow and they work towards creating mischiefs and supporting evil.

As an Aasimar there are several traits that you need to know about. These range from character sheet in D&D including age, personality, and language to your size, speed and other features. Let’s check them out one by one.

Celestials, as we learned earlier, are the best warriors because they are extremely resistant to radiant and necrotic damage.

You can carry out certain activities as an Aasimar, this involves touching the creature and healing it. When you touch a creature, you’ll help it regain points that will make it as powerful as you in terms of action. However, you can only use this trait once and can’t use it again until you rest for a long period.

Light Bearer is a crucial power of Aasimar. They help people find light in an emergency situation. For light-bearing, Light Cantrip is an important object which helps individuals and enlightens a particular area.

Aasimar 5e has been an integral character for people who enjoy power. People who love to work with rules and goodwill. They believe in living a righteous life, guarding others and protecting their own identity.

When you’re choosing a character in D&D 5e, make sure you check and compare the power of different characters as it will help you find the best character for yourself. The character you choose will impact the world in a certain way. If you’re choosing Aasimar, by reading this blog, you must’ve understood your importance in this world and how you’re going to impact the lives around you.