Dungeons and Dragons is an RPG(role-playing games) game that allows you to choose your player and come up with a good story for it. Here, you can give special powers to your character or a specific background and help the DM(Dungeon Master) to set up a good storyline. You can present the players’ background and powers in front of the Dungeon Master and other players. After that, the DM will align your story with others to create a perfect storyline.

The gladiator is a character type that appeared throughout the DnD in various forms. In the “Dark Sun setting,” they’re especially prominent as a character where brutal arena combat was a popular public entertainment in different states of the Tyr region. In the Player’s Handbook, the gladiator background appeared as an alternative to the entertainer’s background. It was one of the inaugural themes in the Dark Sun settings. 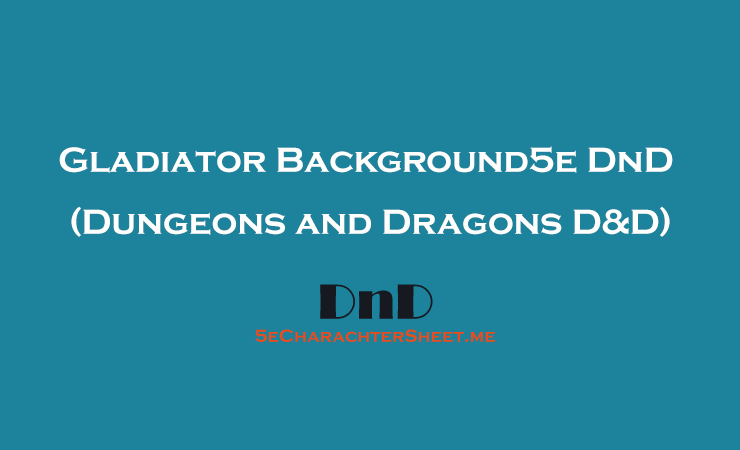 What is Gladiator Background 5e?

You were a gladiator of the colosseum who was captured, imprisoned, and forced to kill others in deathmatches. However, your fighting style made you a victorious gladiator and helped you to remain alive. Now, the colosseum is floating in your veins with the events that took place and the memories replay in the dreams. You are now the result of the past experiences you got either by choice or not. Although you are free now and can do whatever you want, still you get nightmares of the place and sometimes mentally go back to the arena.

In the gladiator’s background 5e of DnD by killing people, you earned the respect or fear and became the champion by participating in the armed combat sports. It is similar to the battle where magical beasts and the wild animal fight with each other until the opponent gets killed. This feature sets the gladiator background apart from other backgrounds.

Usually, these battles were fought using the swords and axes, but sometimes the battle leads by the competition of archery, martial arts, foot races, or chariots, through treacherous obstacle crosses.

A set of common clothes, costume, a disguise kit, a belt pouch containing 15 GP, a trinket(like a belt, sash, trophy, or a badge) from the competition you won, and a unique weapon like a scimitar, net, or a trident.

Any language you speak

There are some skills that you can specialize in and use them to make your character more powerful. You need to present these powers of your character in front of the DM in such a way that he could easily understand how you got your powers in the background. In other words, you need to create a Gladiator background which will not only build your character but also explain how you specialized in these skills. Some of these skills are:

You have the option to find a venue in the town in which you will fight wither for reputation or the money.

The gladiator fight might be held in a secret arena like the underground clubs that give profit to the criminal organizations, or it could be the public arenas sponsored by the government or the rulers of the state.

There are chances when you by chance or against the will become a Gladiator background in 5e of the Dungeons and Dragons. It generally happens when you’re either captured or sold as a slave. Here you can use the skills discussed above to enhance your character. Also, discuss with the DM(Dungeon Master) and other players about your powers and skills.

In Gladiator Background 5e, there is another possibility of you as a criminal. You were executed for the crime you didn’t commit and they sent you to the arena as a punishment as you were a fighter. Another possibility could be an accident. Gladiator combats are mostly brutal, to a death sport. However, in some places, it’s friendly combat to test each others’ skills. So, you’re fighting a friendly battle against your fellow teammate, but accidentally put a sword right through his head.

For this accidental crime, you left the town and lived in jungles, but there some people captured and sold you to the arena owners. Here, you are forced to fight with other fighters till his last breath. The gladiators generally remain silent and won’t speak much about their past, their true personality may differ than that of the character.

Your skills like athletics and acrobatics bought you fame and now people are famous by your ring name – a moniker which helps you protect your identity. The ring name might be a fictional name like a nickname “Jumbo Joe”, or a descriptive name like “The Brutal Barbarian”. With a ring name, you encourage yourself to talk with your DM(Dungeon Master) to flesh out the details of that persona(ring name).

People might not recognize you in simple clothing with a real name walking on the streets, but when you put on your fighter clothes being called by your stage name, people treat you differently and chant your name in the arena. So, use the 5e Dungeons and Dragons gladiator background to enhance your powers and skills and also introduce your character with a different storyline.