Dungeons and Dragons are one of the most popular RPD games around the globe. The reason for this is the big internet community that keeps n adding new characters and backgrounds every week. There are hundreds of characters like the Folk Hero 5, Kenku, Warforged, and Tabaxi are some of the most popular characters in Dungeons and Dragons 5th edition. However, there is a recently arrived character named “The Goliath” with new skills and proficiencies. So, let’s discuss this character. 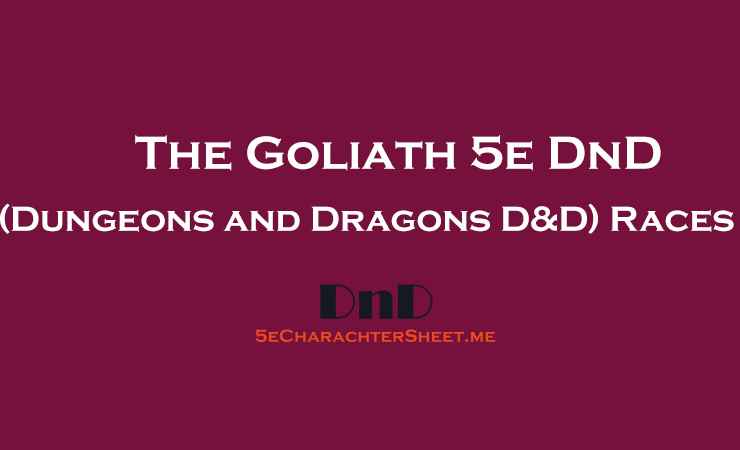 At the highest mountain peaks where long trees grow far above the slopes. The goliath settled up in the mountains where the air is thin, but it’s still frigidly cold and roars in the sky. The Goliaths wander in the bleak realm of cold, dark rocks. They live so remotely that they’re hardly visible to anyone in years. However, few people claim that they have seen him and some even claim to have friendship with them.

The Goliath has a very hard skin as if carved out of those dark-mountain rocks. Their body enables them to display some great physical power. Their souls take them after the cold winds which also makes them a nomad wandering from peak to peak. The Goliaths have cold regard for their frigid realm. This leaves each of them with a responsibility to fight or even die for their tribe and earn a place in it. They usually follow some unspoken rules and obedient to the captain of their tribe.

Goliath is a powerful character and can significantly increase your scores if used carefully. Some of them are as follows:

Average Lifespan: Generally below a century

Every Goliath has three names: a birth name, middle name, and surname. The Goliath get their nickname by their tribal chiefs and the birth name was assigned by mother and father. Goliath birth names were rarely linked to gender as they see males and females as equal. Their nickname is the description, it can change the whim of a tribal elder. It refers wither to their remarkable success or shameful failure. The Goliath use their names in casual conversations and have all three names while identifying themselves.

Below are the different names of Goliath:

The 5e Goliath Race of The Dungeons and Dragons faces new challenges each day. As they live on high mountain ranges, water, food, and shelter become a rare thing. The brave efforts of any individual ensure the survival of the entire group, while a small mistake could vanish the whole tribe. Therefore, Goliath is on a premium place of individual skills and self-sufficiency.

Goliath has an urge to compare their score, accomplishments, and good deeds with other folks in their group. Also, they love to win and sometimes intentionally see their defeat as a prod to improve their skills. However, this dedication of comparison has a Darkside which makes them a brutal competitor. Few Goliath reached old ages die attempting for surpassing their past achievements as an adventurer.

Goliaths think that fair competition only exists if it is accompanied by a level player. The survival in their home territory is measured by the dedication, efforts, and the talent shown in the playing field. In the case of goliaths, the relationship between the noble and peasants puzzles them as the most talented person takes the throne if the king lacks in intelligence. They won’t keep such opinions to themselves and mock in the folks who on the society’s structures to maintain power.

Goliaths are a huge creature, most of them stand 7 to 8 feet tall and weigh about 270 to 340 pounds. There is not much difference in the height and weight of male and female Goliaths. Their skull has occasional lithoderms, jutting eyebrow ridge, and wide jaw. The skin-colored is grey with dark and light patches with blue colored eyes. Maes has hairs only on their limbs, while the females have dark long hairs which they kept braided always. As their skin mottling culture signifies, they prefer light dresses.

Survival of the Fittest

Any adult Goliath, who’s not able to contribute to the tribe is expelled and has a little chance of survival. However, they feel pity for the old and adults who can’t take care of themselves. As a result of fair play, they treat the sick and injured ones. However, he or she is expected to pull his or her weight in the tribe. But these Goliaths typically dies in attempting to keep up, or walk away in the night to seek their cold will of fate. They are a risk-taking race and because of that, their tribes face a lack of experience offered by the old leaders.

In some ways, the goliaths try to outdo themselves and escape from the grimness inevitability of their death. A goliath would happily die on the battlefield, at the height of strength and skill, then enduring a slow decay of adulthood. They hope for innate wisdom in their leadership, for they will rarely calculate wisdom grown with age.

They live in small tribes of up to fifty members and have a key focus on competitiveness. Most of them live their entire life in one tribe, they only split into smaller groups of their tribe gets too large. Some of the key roles that of their tribe filled by the most capable members are summarized below:

Chieftain: He’s the prime authority of the tribe who choose the member in the tribe for other key roles and also decide when they should move to new lands.

Skywatcher: perhaps the most experienced druids of the tribe are exempted from the teams assigned by the captain each morning. The skywatchers look after the rituals, festivals, and celebrations. They also make sure that the resources are not over-harvested as it may lead to problems in cold dark winters.

Captain: The job of two assigned captains are hunting, cooking, scouting, and gathering.

Lamentor: The lamentors are responsible to reach the tribe members and determine if they’re old or weak enough to serve as a non-productive member. The lamentor approach individuals and explain his decisions and consult the chieftain.

Tent-mother: It is the only gender-specific role of the tribes who works as a wet-nurse. Chosen by the chieftain, their duty is to take care of the infants and toddlers of the tribe. Also, they decide when a young Goliath is ready or old enough to start contributing to the tribe.

Adjudicator: The adjudicator is more like a Judge of the tribe. They hear the disputes after the dinner if it’s not urgent. They also act as a referee in various sports. If a Goliath is not satisfied by the decision of an Adjudicator, then the chieftain himself makes the final judgment.